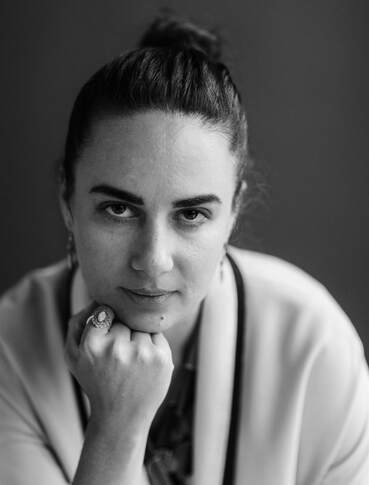 Ksenia is a Russian-born award-winning film director, screenwriter, and producer based in Chicago. She is a member of BAFTA Connect, NYWIFT and Film Fatales.

Ksenia attended The Russian State University of Cinematography (a.k.a. VGIK) and while a student worked on a number of TV shows for several years. Her portfolio includes credits on numerous well-known productions, such as script supervisor for Star Media, the TV-series University, New Dorm, and others. She also worked as a line producer at the Absolute Film Production Company in Moscow. Additionally, Ksenia produced and directed three independent short films, including two social issues-themed documentaries.

Later Ksenia applied to several Master of Fine Arts programs in the US and Canada. She chose Columbia College Chicago where she received a Full Tuition Award. There she worked as a teaching assistant and interned on the set of Widows directed by Academy Award-winner Steve McQueen. Furthermore, Ksenia worked as an assistant in the location department on the TV series Chicago Med. She has assisted in research and development on several documentary projects, including one episode of Extinct or Alive for Animal Planet, a feature documentary, Tomorrow's Hope, is about the Educare Early Education Center in Chicago, and a feature documentary for Apple TV on pop star’s Selena Gomez’ crusade for mental health, directed by Alek Keshishian.

Ksenia’s films have been screened at a multitude of film festivals around the globe. Ksenia is a recipient of the Albert P. Weisman Award, Carole Fielding Student Grant, The Arch Bruce Brown Foundation Grant and The Lya Dym Rosenblum Professional Development Award. Her thesis film Jack and Anna has screened at 40+ festivals including the Academy Award®-qualifying 28th St. Louis Film Festival, the Academy Award®-qualifying Indy Shorts International Film Festival, and the American Pavilion Emerging Filmmaker Showcase at the Cannes Film Festival. It won the Best Global Short: Beyond the Rainbow Award at the 2019 SCAD Savannah Film Festival and has been nationally recognized at the 42nd Telly Awards garnering Silver and Bronze Awards. Ksenia was also nominated for the Young Director Award, Cannes Lions, and the Student Short Film Showcase at 2020 IFP Gotham Awards.
​
Since 2019 Ksenia has directed a few episodes of the AmbienceTV Series for the GoTraveler Channel. Recently, she co-directed a feature-length screen adaptation of One Woman Hamlet, a show dedicated to mental health awareness. It premiered at the 2022 NYC Indie Theatre Film Festival. She is currently developing a few projects, including a pilot, a short, and a feature.